Here’s the thesis: Batman’s first self-titled comic book told four stories that have generated more entertainment dollars per page and more consistently year to year than nearly any other piece of printed fiction; and seeing the Dark Knight in costume for decades (on screens big and small, with all kinds of tones) prepped all of us to be ready and cash-flush for the MCU to commandeer the box office.

Today, well-graded copies of 1940’s Batman #1 are clearly blue chip collectibles because of the one-in-a-million intersection between rarity, recognizability, and (what we’re going to talk about here) cultural significance. Batman debuted in Detective Comics Issue #27 (cover date of May, 1939. published March 30, 1939) and Robin first appeared in Detective Comics Issue #38 (cover date April, 1940. Published March 6, 1940.) But! Batman #1 has the debuts of two additional legends: the Joker and Catwoman.

And it’s not just the new characters that stand as debut features from this issue – central ideas and tenets for the very mechanics of the Batman universe are established here and hold through today. And while there’s some weirdness, there are also surprisingly-enduring pop culture references (the War of the Worlds radio broadcast, a very classic jewel heist setup, and way more instances of adults passing time playing Solitaire than we would expect today) and the issue adds tons of dynamics that we didn’t see in Detective Comics between heroes Batman and Robin. It’s a crazy achievement that these ideas have had such long legs and their success has made these eight decades of fandom possible.

It’s not just the new characters that stand as debut features from this issue, but also central ideas and tenets for the very mechanics of the Batman universe.

Batman #1 is presented as four stories over 54 pages. The first introduces The Joker. The third debuts The Cat (later renamed Catwoman). And the finale follows up on the Joker, cementing him as a franchise-long antagonist.

In the Joker’s debut, we get a reprint of the Batman/Bruce Wayne origin story, just with color changes, from Detective Comics #33 (shown below, after the original version in Detective Comics).

As the Joker kills a series of rich men with fancy collectibles, we see a few of his traits that have held as core identifiers – the purple suit, the alarming grin, the playing cards, and unusual weapons. But we also see some sophistication and characterizations that are dramatic steps up from the one-note criminals in Detective Comics. The Joker is patient, very smart, and brutal. His crimes are theatrical and planned to cause the most terror, not just in the direct victim, but also in the police and the public. In the issue’s closing story, an activist starts speaking out about the police’s ineffectiveness; he’s killed off (very) quickly, but starts a dialogue inside and outside the force that traditional law enforcement is impossible with these criminal masterminds and masked vigilantes might be the only way.

In just two entries, these pages establish so much of what we still see as compelling and vital in the conflict between Batman and Joker.

The Joker’s weapons would have had an extra layer at the issue’s debut, as they tied into a very present-day terror: gas warfare in World War 1. The Geneva Convention outlawed the use of poisonous gasses in conflict, declaring that it “has been justly condemned by the general opinion of the civilised world”. Many pointed out during the war that gas might not be as deadly as other innovations like the flamethrower or more-practical machine guns, but did have an outsized psychological impact. In the BBC article How Deadly Was the Poison Gas of WWI?, historian Ian Kikuchi says, “Gas, which moves like a vapour, brings to mind ghosts, phantoms and other things associated with death,” he says. “I also think it has something to do with gas masks themselves – to protect yourself from the gas you have to make yourself look and sound frightening.”

The Joker deployed deadly, unknown poisons into groups of victims and when people died from them, they were disfigured with a painful-looking, lurid grin. Today’s audiences are still freaked out by it. It’s brilliant.

Batman #1 is no creative slouch and its blue chip status doesn’t rely on the circumstances of its publication.

Catwoman’s story, delightfully, is a Cliff Notes version of almost any Agatha Christie novel – wealthy people isolated on a party boat are targeted by jewel thieves. But in the middle of these goon fights and dramatically-removed disguises, we also get some strong Myers Briggs’ Explorers vibes from The Cat (who will be called Catwoman in following issues). She is beautiful, disloyal to anyone but herself, opportunistic, and talented. In, literally, eleven panels The Cat is revealed/debuted, captured, escapes, and clearly entrances Batman, who has to remind himself that he already has a fiance.

These specific entries (the two Joker and one Catwoman) also define a world tone that holds for the next 80 years and wasn’t established in the earlier Detective Comics.

In popular entertainment, one domain where women could comfortably be sophisticated and morally dubious protagonists was detective fiction. In the 1920s and ‘30s, European writers popularized and then codified the genre and had such overwhelming popularity that the style’s biggest star, Dame Agatha Christie, still stands as the bestselling fiction author of all time (certified by Guinness World Records at 2 billion books sold). The genres’ recognizable traits are highlighted here: rich people are grouped together (cough Death on the Nile cough), the clues are all there from the start, the perpetrator is revealed dramatically, and the whip smart women also know that they’re beautiful. Catwoman continues to be the dangerous, capable, sexy criminal foil for Batman to this day.

And What Did Batman #1 Build?

Holy box office, Batman! To keep this thesis in some kind of scale, we’re going to tally up box office receipts for movies that include Batman, Robin, Joker, and/or Catwoman in a central role and are theatrically-released. Then divide that by the number of pages in Batman #1. If you really want to go down a content rabbit hole that’s not included in this tally, PLEASE WATCH THE ANIMATED SERIES! They’re amazing and Mark Hamill’s Joker is a national treasure. And the 1960s series is a delight.

We’re also moving right past the video games. Batman has both mature, serious entries (most with Arkham somewhere in the title) and a successful Lego line, all of which owe this specific comic in some way or another. And, any DC teams titles include the Dark Knight, because he’s amazing. Try out the Batman VR titles for something a little unusual and those Lego ones are great for whole households.

Many of the biggest franchises today also leverage the heck out of merchandising (hello Pokemon), amusement park stuff (oh hi Harry Potter), and complete domination of a life stage (Winnie the Pooh has entered the chat with branded nappie in hand). It’s real money, but out of scope here.

Thanks to Wikipedia for charts of box office returns for DC and Batman movies with a North American theatrical release. The total (adjusted) worldwide gross is $8,518,031,143 (full list of included titles below). So! The average box office revenue per page of Batman #1 is $157,741,317.46.

In our hearts? No one. Batman is the best. But on the balance sheets, there’s some real competition from Harry Potter and Spider-man film returns as fellow franchises with debuts in printed fiction. Others on the list include some surprises: Winnie the Pooh, Dragon Ball, and Lord of the Rings.

It’s good company and when you compare the pages of the first entries in these other franchises, shows the real density of amazing choices in Batman #1. Joker and Catwoman for sure. The subtexts of terror, mystery, masterminds, and noir are also crucial to the Batman idea and our gloomy hearts are grateful to have one of our own who can sometimes swing to camp and theater and also real, dense drama. The Dark Knight forever!

And, more than most of the other biggest entertainment franchises, Batman’s output shows tonal diversity and resilience. Stemming from Batman #1, the characters and tenants set up in this one single comic have prepped a generation for the scale of storytelling that the MCU has now been the boss of for 10 years. We are here for it! We’ll take all kinds of stories in a bunch of mediums and that might be thanks to Batman and the extremely dense thoughtfulness in Batman #1.

“List of Films Based on DC Comics Publications.” 2020. Wikipedia. May 6, 2020. https://en.wikipedia.org/wiki/List_of_films_based_on_DC_Comics_publications. 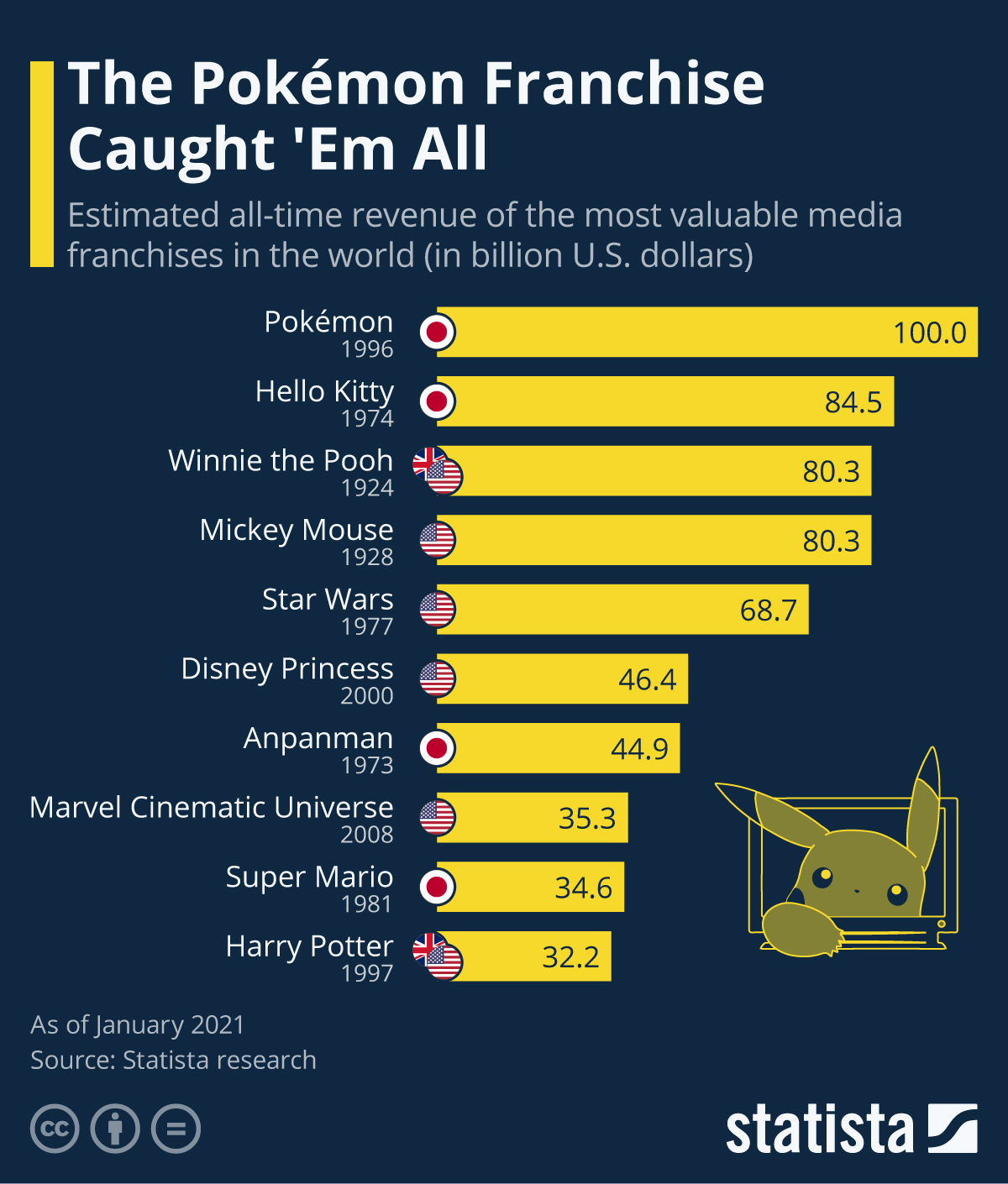 You will find more infographics at Statista